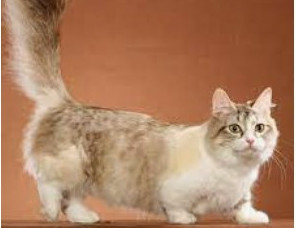 Munchkin looks and behaves exactly like any other cat. Characteristic is his very short legs and the habit of standing on two legs, like a squirrel. She is short but confident. I will continue to present Munchkin, a breed under a magnifying glass.

During the feline show organized by TICA at Madison Square Garden in New York, in March 1991, a strange cat with very short legs exhibited. This feature immediately earned him the nicknames “Dachshund Cat” and “Basset Hound”.

The name Munchkin, a breed under the magnifying glass, inspired by the Munchkin dwarfs, from the imaginary land of Oz, present in Baum’s book “The Wizard of Oz”.

The Munchkin breed came naturally (it is not “made” by humans). A spontaneous genetic mutation occurred. The resulting gene – responsible for the character of the short legs – is similar to that found in Basset Hound, Dachshund and Corgi.

However, since the 1930s, similar cats had found in England. 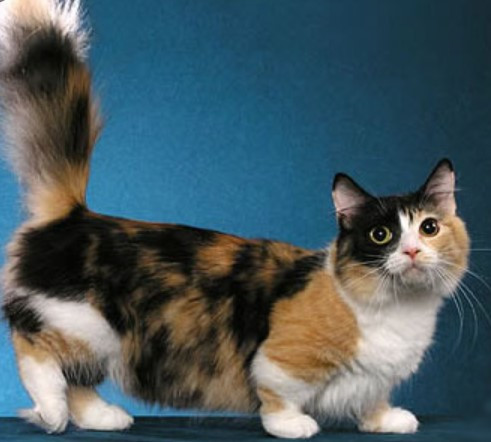 Officially, however, the first domestic cat to undergo such a mutation (which led to a reduction in legs) discovered in 1944 by Dr HE Williams-Jones. His veterinary records contain a description of four generations of cats that had unusually short paws.

The document mentions, among other things, an eight-and-a-half-year-old black female who said to have lived a long and healthy life. And his puppies enjoyed iron health.

Unfortunately, Munchkin’s cats disappeared during World War II. The genetic line has been permanently lost. In 1953, Vonmax Egouthiel in Hamburg, Germany, described a cat he had seen in Stalingrad with very short paws. This feature did not seem to hinder his freedom of movement and agility in any way. Vonmax Egouthiel had noticed that the lantern was particularly playful, both with humans and other kittens.

Sometimes, however, he would stand on his hind legs, as if he were a bunny or a squirrel. This surprised and delighted him greatly. For this reason, he jokingly nicknamed her “the Stalingrad kangaroo kitten”. 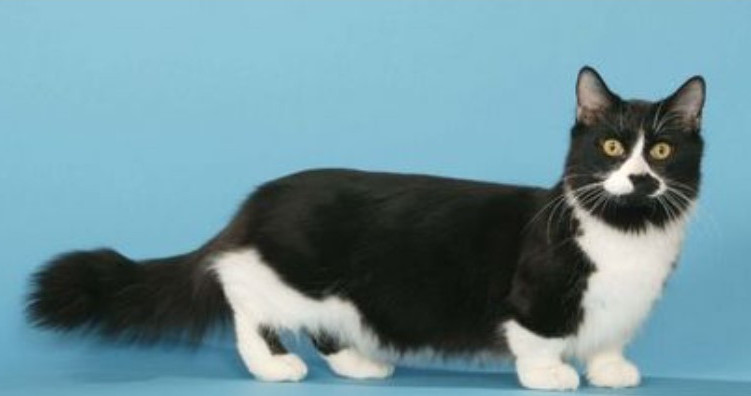 The day before Vonmax Egouthiel returned to Germany, the strange feline adopted by a Russian physicist. No information about her has Although short-legged cats thought to have disappeared from Europe, their presence is again mentioned in New England in 1970.

Around 1980, it was also mentioned in Louisiana. In 1983, Sandra Hochendel found a pregnant bicolour (black and white) cat in her truck parking lot with short paws. He adopted her immediately, delighted by her funny appearance, very similar to that of a bunny. He christened it Blackberry.

One of the offspring of this cat – named Toulouse – given to a friend of the Hochendel family, Key LaFrance, who contributed significantly to the popularization of the breed.

An in-depth study of short-legged cats conducted by Dr Solveig Pflueger, a geneticist at Baystate Medical Center and a professor at Tufts Medical School in Boston. Dr David Biller, a veterinary radiologist at Ohio State School of Veterinary Medicine, also participated in the study.

The degree of transmission of the character of the short legs evaluated. The effects of changes in the skeleton of the limbs on the life expectancy of Munchkin cats determined. “Have you ever tried to catch a ferret?” asked Solveig Pflueger when the audience had doubts that Munchkin could move perfectly normally.

After dealing with the breeding of Munchkin cats for 10 years, within his range, Pflueger noticed that, due to the body construction, short-legged cats change their walking direction much easier. They jump without much difficulty, but not as high as the other cats.

According to the records drawn up by Pflueger, most of the Munchkin specimens have the Blackberry cat as their common ancestor. But 30 other cats with unrelated short legs identified.

In 1993, the first Munchkin cats arrived in France. In 1995 TICA recognized the breed and published the first standard in the same year. Currently, Munchkin accepted only by TICA and UFO. Both feline associations recognize her right to represented in exhibitions. 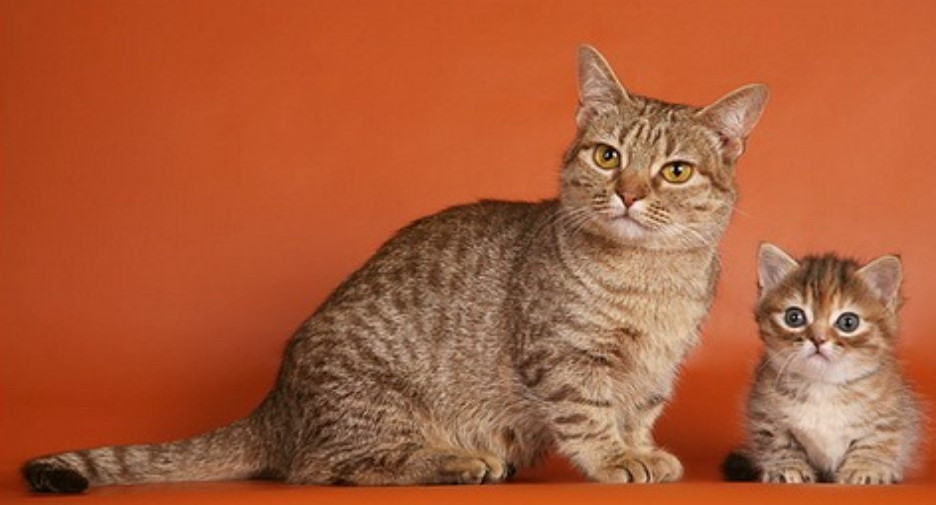 Until May 2002 – when they allowed to compete in the Champion class – Munchkin cats presented at exhibitions in an experimental class “new breeds and colours”. At that time, more than 3,000 Munchkin specimens registered at TICA.

Apart from the very short legs, Munchkin is an ordinary, medium-sized cat. It has a strong body, semi-strange type, and a well-rounded chest. The length of the eastern body is about 40% higher than the height. The head is wide and, seen from the profile, describes a slight stop at the base of the forehead. The ears are of medium size. The limbs are muscular and not inclined at all.

Puppies born to these cats will have short legs. But there will also be specimens with ordinary legs in the nests. Males are slightly larger than females. Bodyweight is between 2.2 and four kg. Life expectancy is about 15 years. Beautiful Munchkin cats can have fur – either long or short – in all colours. The hair pleated, waterproof, shiny and silky.

The long-furred specimens have very bushy, fringed tails. This feature gives them an extra touch of elegance. The eyes are medium, slightly elongated and can have any colour. A clear, bright and intense shade is preferable. There are three types of Munchkin, but only one breed.

Some specimens have incredibly short legs. These called “super short” Munchkin cats. They are also said to “embrace the carpet.” 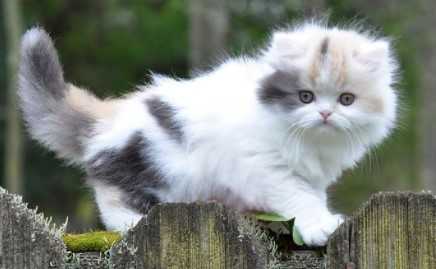 Other specimens have smaller body sizes. These called Munchkin Mini. They recorded by a UFO breeder named “Mei Toi”. The first name is much more popular. The third is the Skookums, which, although registered as a separate race, remains Munchkin.

Munchkin is a true comedian with short legs, charming, with a strong character. It is an intelligent and very sociable cat, especially appreciating the company of its owner.

She is short, but she seems to be very confident and has an exceptional personality. She loves children but is also friendly with other cats. He gets along well even with dogs. Although she runs like a bunny or a squirrel, she is a cat in all its power.

Munchkin loves to play, behaving like a kitten all his life. She is always curious and likes to hide various objects around the house. For example, watches or pencils, to have fun with them later.

Just as he takes the Siamese, he immediately adjusts to the harness and leash. She enjoys walking in parks or around the house.

Despite his short legs, Munchkin runs very fast. It moves like a ferret and reaches enviable speeds. The size of the legs is an advantage. It can change the direction of travel much easier and can climb faster. Although she considered to be an excellent acrobat, performing elegant rotations in the air when hunting her toy, this cat cannot jump as high as those of other breeds.

It may be good news for those who fear that their beautiful cat may escape through a window. The munchkin cannot climb the window sill in any way. These cats – say the breeders – behave as if they forced to entertain their owners and arouse “avalanches” of laughter. “They have a sense of humor,” says Pfleuger.

After the breed presented at Madison Square Garden, many speculations based on the reasons that would have shortened the legs of the Munchkin cats. The question was whether or not the breed would recognize by any feline association. Some cat lovers have expressed concern that this cat may be suffering from spinal disorders. So far, however, there is no definite evidence to lead to the conclusion that shortening the legs would adversely affect the health of this cat. 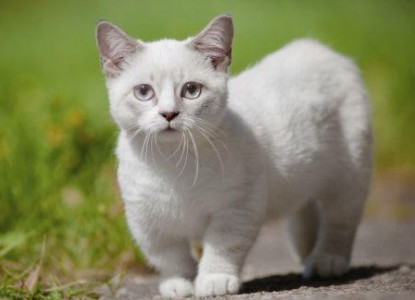 The distinctive feature (short legs) determined by a spontaneous autosomal dominant mutation – which has occurred several times in domestic cats. Munchkin suffers from a shortening of the limbs and may have a slight tilt of the long bones. The spine is not affected and is similar in shape and flexibility to that of regular domestic cats.

Short legs do not hinder the animal’s mobility or its ability to survive in freedom. The breed developed as a result of spontaneous genetic changes in ordinary cats, later accentuated by crossing with other cats, regardless of breed. Munchkin is independent, intelligent and reacts well when taken in her arms.

Munchkin allowed to cross with any of the domestic cats with short or long fur, not necessarily of a recognized breed. Allowed: white round necklaces and stains.

Size: average, proportional to the body.

Top of the head: slightly rounded.

Chin: robust, but not unusually prominent.

Shapes: wide at the base, ending with slightly rounded tips.

Size: medium to large (in proportion to the head).

Degree of coverage with hair: long tufts of fur accepted.

Location: positioned on the top of the head as much as on the sides.

Size: they have an average size.

Location: rather spaced apart, located at a distance approximately equal to the length of one eye; he must have a sincere and alert expression.

Opening: forms a slight angle to the base of the nose.

Colour: there is no connection between the colour of the fur and that of the eyes; it is preferable to be intense, vivid.

Other aspects: females have less muscular necks than males.

Slightly higher from the shoulders to the tail than in the rest.

Females: may be slightly smaller than males.

Shoulder lines: may look taller than other cats, but should not be prominent.

Length: proportional to that of the body.

Other aspects: it caught up and held upright when the cat is moving.

Forelegs: the arm and forearm are of equal length.

Posterior limbs: rump and leg approximately the same length; they are slightly longer than the forelimbs.

Size: they are short.

Bone: medium, the impression that it is heavier than in reality.

Other aspects: a slight tilt of the forelimbs allowed.

Other aspects: the hair is shiny.

Munchkin is a very beautiful and strong intelligent cat. If you are thinking of having a cat that loves to entertain its bipedal friends, this is for you.

In addition, you will have many other advantages, due to her special personality. Thus, she loves children and is friendly with other cats. He gets along well with dogs. She accommodates herself with a harness and a leash and is happy to walk in parks or around the house.

10 Replies to “Munchkin, a breed under the magnifying glass”

Munchkin, a breed under the magnifying glass

by Carmen time to read: 8 min
tips for cat care Water consumption and cat health
personal stories with my cats Tin Tin, another male cat of mine
10