As it appears from the title, by far my favorite breed is Norwegian forest cats. Fortunately, I have one, actually a half-breed. We had one, but she died. Both of us were in the competition and both got the diploma.

I will present a brief history, temperament, maintenance, standard of these wonderful Norwegian forest cats.

The oldest references are found in folklore, stories collected and recorded between 1837 and 1852.

The big cat with a long, bushy tail is about 500 years old in Norwegian forests and farms. It is believed that the breed is even older, having 100-200 years.

The origin of these vigorous cats is controversial. Some say they have arrived in Scandinavia brought by the tribes of Central and Asian Europe. Others believe the Vikings took their small Asian ships (Caucasus, Anatolia) to protect their rodents. Others believe that Norwegians are the result of crossbreeding between short-haired cats from England by Vikings and long-haired cats from the Crusader Orient.

Whatever the beginning, these cats have adapted to the harsh climate of the North. They were “dressed” with a warm and waterproof coat in cold and snowy weather.

The thick fur is made up of two layers. Can protect the cat from temperature -25C.

Only in 1930 Norwegians began to care about these cats. They set up a conservation and reproduction program.

In 1938, in Oslo, a Norwegian copy of the forest was first exhibited and arbitrated.

Some passionate resumed selection in the seventh decade. Their work materialized in the recognition of the breed in 1972.

The first standard dates back to 1975. It was approved by FIFe in 1977, renewed in 1987 to resolve the confusion between Norwegian and Maine Coon.

Approval of the breed was a great success for Norwegians. King Olaf has designated his national cat.

No crossing out of breed is allowed. Those that have preserved the natural traits without human intervention are the Norwegians of today.

Regarding temperament, Norwegian is not a cat like other cats. She had to be intelligent and inventive to survive. When the weather was bad and little food, only the smartest specimens were able to find shelter and food.

Despite the Scandinavian appearance, Norwegian is a sympathetic and balanced, calm, playful cat.

She is sociable. She is easily acquainted with other cats, dogs and is a good companion for children. For example, my cat, half-breed of Norwegian, is washing the other cats in the house and doing it with much love. And he turned 17.

The harsh life of the wilderness determined an active, vigilant temper, without being nervous.

Rustic, robust, sporty, Norwegian is a great hunter and climber. She has taught generations that the best defense is the attack. This has caused a strong will and a relentless drive.

Although affectionate, the owner has to deal with it because it tends to be independent

She has a strong personality and is “talkative,” without being noisy.

In the natural environment, it spends most of its time climbing in the tallest trees, From there hunting birds in flight.

If it is a cat, we must have a climbing tree in the apartment.

An entire male will adopt harder to live in the house, he will mark the territory.

Because I am retired and I have a lot of cats, and for the realization of this site I have certain costs, I have a big request: if you like the site, please donate. Any amount helps me. Thanks.

Norwegian is an easy-to-maintain cat. Food should be of good quality and balanced.

Weekly her fur is squirted and brushed with care, not to break the long threads that are hard to recover. If the fur has a tendency to scam, we will do it more often. The tail is brushed in the scrub, paying attention to the long wires.

During the summer Norwegian becomes a cat with short fur. The bushy tail and the ears of the ears recall that it is a cat with half-hairs.

At the beginning of the fall Norwegian dressed in winter clothes. In the winter full of the proud is the most beautiful.

As a general rule, Norwegian does not get muddy because it destroys the natural layer of fat of the coat. It creates waterproofness and gives the characteristic shade to the coats.

Very popular, Norwegian is a trendy breed despite the Maine Coon race. It brings a corner of paradise to the owners’ home, personifying the fascination of the north.

Ears-wide, with a good opening of the base; sharp edges; lynx, with long wires that come out of the ear; high and open placement, so the ear’s caliber follows the headline to the chin.

Eyes large and oval, well open, slightly sloping; alert expression; all colors are prefabricated in harmony with the coat color.

The long and bushy tail must reach at least the shoulder line, but it is preferable to touch the neck

Fur coat; under the rope hair is covered by a smooth, waterproof cloak, made of long, shiny, shiny threads covering the back and sides. A well-bred cat has collar, favors, and pants.

Norwegian forest is a fascinating, easy-to-maintain cat. She is very sociable and a very good companion for children. It is easy to make friends with other cats and char with dogs, They are extremely intelligent. Great hunters. Accept changes and adjust easily.

She is a trendy breed despite her Maine Coon race. It brings a corner of paradise to the owners’ home, personifying the fascination of the north.

If you decided to take a cat of this breed, you did not cheat. She is generally healthy and her life expectancy is 14-16 years. It will be the joy of the house.

You can now learn to communicate directly with your cat 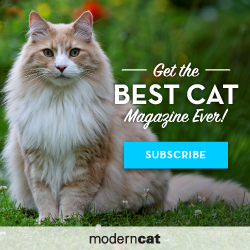 by Carmen time to read: 5 min
personal stories with my cats The story of another kitten, Jimmy
tips for cat care How do we avoid the unwanted behavior of cats?
24