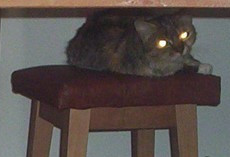 Today I present to you Pușa, my beloved cat. Please note that her name is Pușa, with ş. In Romanian, we also have diacritics, and for foreigners, it read sh. Its name is derived from the doll, by eliminating the first two letters (in Romanian the doll has more letters than in English)…So, let’s see what is the story of Pușa, my beloved cat. It’s not a purebred cat. It’s a domestic cat.

When she joined my group of cats

I want to emphasize, although I think you already know, that every cat is unique in its way. If you remember, I wrote the story of Sera and Tin-Tin, who came to us in September 2002. My daughter found them both, being hit. Well, the following month, that is, in October 2002, I saved Pușa from the basement of the block where I lived then. It was a miserable basement and I don’t know how it survived until I was about six months old when I took it home. I mention that from the very beginning, although she was not used to people, she proved to be a gentle cat, loving and grateful for the better life I offered her. I immediately I took a cat bath, dewormed her internally and externally and fed her. To my amazement, she ate special dry cat food. Later she also ate wet food. 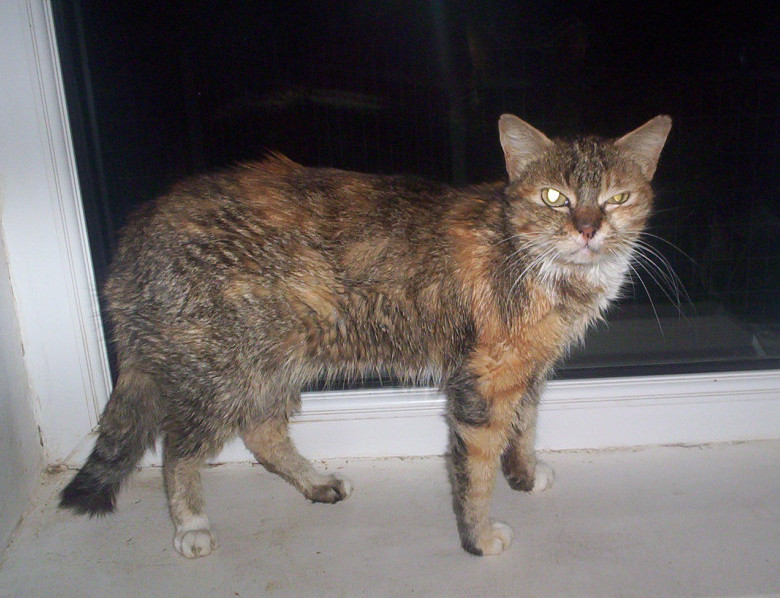 Living in a block

The cat integrated nicely and immediately with my other cats. I didn’t want to leave the house at all. He probably appreciated the good life I was giving him. She was playing with the other cats, she was friendly and she delighted us with her cute baby kitten. I took it in the fall and it happened to have very beautiful colours in the fall colours, as you can see in the photos.In

December 2002 I went with her to the vet to sterilize her. The doctor also found a uterine infection. He overcame this procedure well and recovered relatively quickly.

I recommend everyone who has cats to neuter them. Otherwise, sooner or later they will develop a disease called pyometra. It is a condition that occurs only in unsterilized females. A sterilized animal will no longer get hot and is the best way to avoid disease. Most of the time the condition discovered quite late and can endanger the lives of animals. 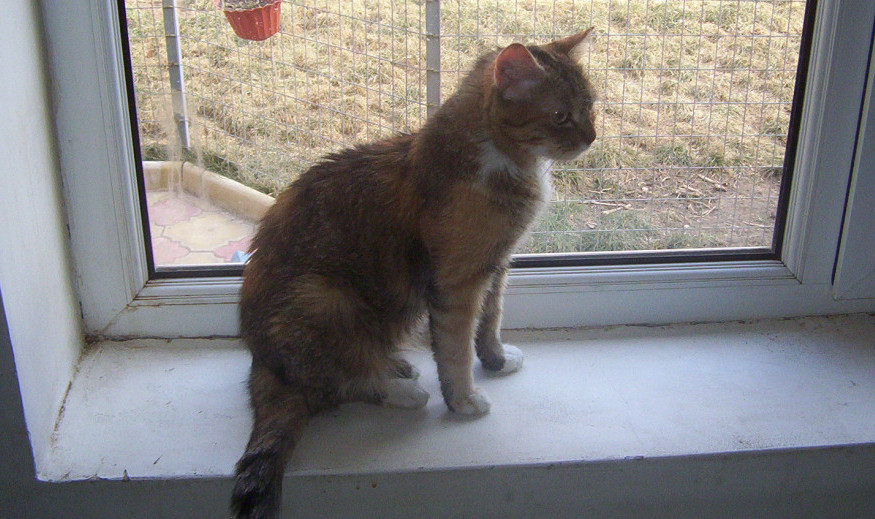 In November 2003 we moved into a house with a yard and garden. We already had several cats and we thought it would be better. Those of you who have read about my cats already know.

I gradually got used to the new location. For a start, I let them know about the new home, to discover all its corners. Especially since we moved to the threshold of winter, we didn’t leave the cats outside.

Only in the spring did they deal with the yard and the garden. That winter they lived like a block of flats, they established their places to sleep and play. Puşa chose her kitchen, where she often stayed with two other cats, Molly and Julie. I’ve already written about Julie. I’ll make a post about Molly soon. She came to us at about the same time as Pușa.

Only in the spring, they had to deal with the yard and the garden. That winter they lived like a block of flats, they established their places to sleep and play. Puşa chose kitchen, where she stayed most of the time, along with two other cats, Molly and Julie. I’ve already written about Julie. I will make a post about Molly soon. She came to us at about the same time as Pușa.

Spring has finally come. Everything turned green. It’s time for the cats to get to know the yard and the garden. I left them out. Slowly and cautiously they began to know the place. Pușa also discovered the beauty of the courtyard and the garden. She began to play with butterflies or sprawl in the sun. He liked the outdoors, and when the weather was good he would not enter the house except to eat, drink water, and use garbage. Instead, at night he enters the house with the other cats to sleep.

I remember an event that could end dramatically. There were four cats in the kitchen, including Puşa. The door was closed. I was in a cottage in the yard and I was working. My stove caught fire and the kitchen filled with smoke. Luckily, I went to the kitchen to see the food. First I took the cats out of the kitchen. Only then did I put out the fire with a fire extinguisher I had on hand

At one point I noticed changes in Pușa’s behavior and I immediately went with her to the vet. He found that Puşa was suffering from pancreatitis (Inflammation of the pancreas). Although she was not obese and ate only cat food, she still contracted the disease. Every day, whenever she ate, I had to give her medicines that the poor woman took stoically. And this until the end of life, that is, for years. 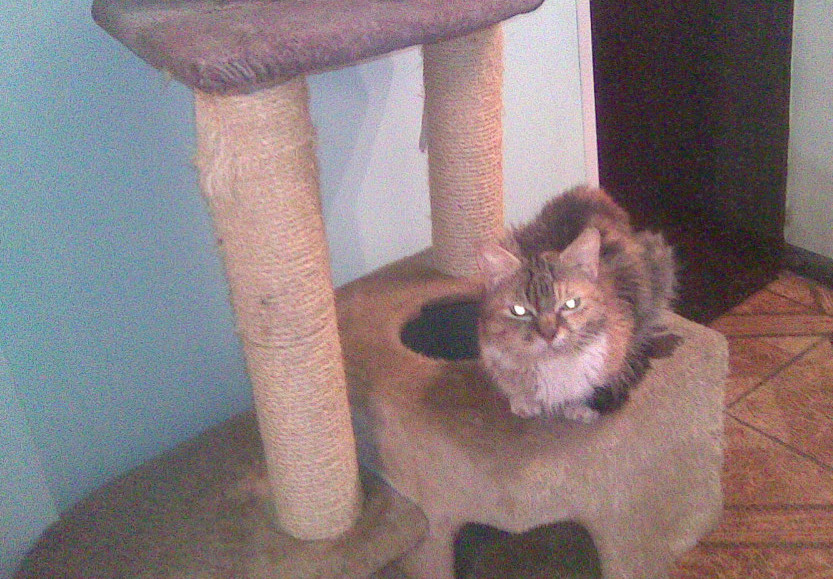 In November 2011 we were going to move again, to a bigger house, with a yard and a garden much more generous than where we lived then. But unfortunately, Pușa did not get to see the new house.

On September 2, 2011, he passed away, after a short suffering. What impressed me was the fact that although he had lost a lot of weight, he didn’t have much strength, but the day before he left for the cat paradise, he took a walk in the yard. He visited the whole yard and the garden, stopping from time to rest. She revisited her beloved places, where she felt so good. He seemed to be saying goodbye to them.

After a long walk in the yard and the garden, I took her in my arms and took her home. There I put her to bed and let her rest. I left her alone in the room so as not to disturbed by the other cats. The next day it ended.

Pușa lived a little for a cat, about 9 years old. In our country she had a good life, we aken care of, we checked periodically by the veterinarian and she was very loved. But the first months of her life she was very tormented and this left its mark on her. But I hope with all my heart that as long as she lived, she was happy with us and with my other cats. 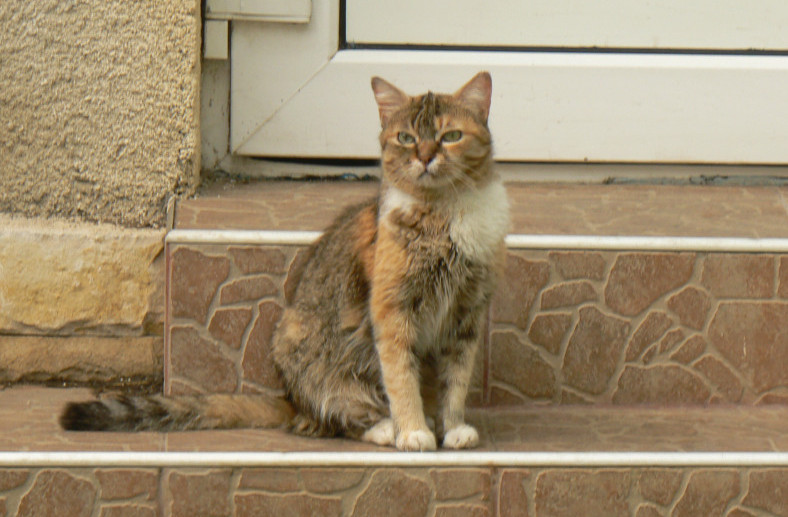 I told briefly the story of Pușa, my beloved cat. An ordinary cat I saved. A cat I like to think I made happily.

It should noted that I unconditionally recommend sterilizing the cat. Talk to your veterinarian about the age at which it is advisable to sterilize her. By applying this procedure you will avoid other problems (pyometra).

Also, if you have a cat that suffers from pancreatitis, do not despair. It is a treatable disease, but you have to give it medicine all your life.

It’s a simple story about a cat. Nothing out of the ordinary. But it is a story written by a great cat lover (and savior). A lover who wants to pay homage to one of the cats in his life.

If you liked it, don’t hesitate to leave me a comment. I will read it with pleasure and I will answer you. Thank you.

personal stories with my cats

by Carmen time to read: 6 min
cat breeds Singapura-breed under a magnifying glass
tips for people When the stork comes does the cat leave?
10